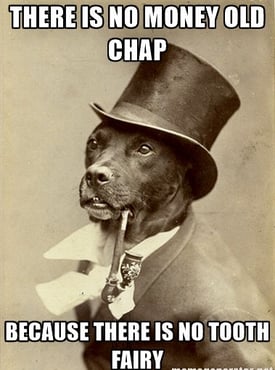 I can still remember being little, losing a tooth and being amazed that a quarter (showing my age) found its' way under my pillow by the time I woke up. Of course, it is only something we believe for a few years before we realize mom or dad funded the quarter. Even reaching that realization and loss of innocence provides great value in that we learned that every benefit had to be funded somehow.

As we go through healthcare reform once again, let's not forget this. From what I am reading, people are getting caught up with ideas and sound bites, all with no substance. Some want to tweak the Affordable Care Act, but not repeal and replace.  Why?  Isn't what ends up long term the more important thing? I hear people say buying insurance across state lines will make a big difference. Why? Insurance premiums are based on claim costs which are based on rates paid to hospitals and doctors. If a Blue Cross plan has 50% market share in a state, and hence more leverage with the providers, what are the chances an out-of-state plan with no volume is going to come in and cut better deals with the providers? Some people say health savings accounts are the answer. Why? The majority of spending is by people who spend more than $50,000 a year. An HSA is not going to influence any of their costs.

Don't get me wrong. Some of these ideas might save a little. Maybe $4 a month on a $400 a month premium, but that is a rounding error and not what people are looking for. You want rates to drop a lot?  Well, we could all exercise, and get to an ideal weight. Premiums would fall through the floor...ok, just kidding. Absent that, get rid of the pre-existing condition coverage and the problem is solved.

Here is the next painful truth. There is no tooth fairy or “free lunch”. Somebody has to pay. The ACA tried to deal with this by requiring healthy 20 somethings who weren’t in the market to pay way more than they should for health insurance to fund this amount (spreading the risk), thus lowering the average cost. Many of these young healthy people balked, and we are left with a risk distribution curve skewed to high cost users, raising the average cost. The ACA also assumed that high deductible plans with HSA accounts would encourage preventative care and “smart shopping”, thus lowering the overall cost curve. That didn’t happen either. People spent the savings (vs. lower deductible plans) on car payments, mortgages, and vacations.

Higher average costs discourage healthy, low cost people from complying with the law, leading to even higher average costs, and we have the classic death spiral. That is why the insurance companies are exiting the market and the system is collapsing under its' own weight. That is the plan the Democrats are trying to protect. The Republicans, on the other hand, have put a bunch of ideas out there, some of which were addressed above, but to date I have heard of no way of funding the $100 billion. If you say you want people with pre-existing conditions to have coverage, but have no realistic plan to raise $100 billion a year, you believe in the tooth fairy. The ACA did not have a realistic plan, and neither do the Republicans at this time. As proposals come forward over the coming weeks let's not let people gloss over the math this time.

What is a realistic plan to fund the $100 billion? I'm just one guy, but here are a couple of ideas. Set a national specific reinsurance limit and pay all claims over the limit at 125% of Medicare Allowable, or somewhere in that range. Make Medicare the default fee schedule in the country, but allow insurers and providers to negotiate higher rates, as long as there is full disclosure. If we did, my guess is rates would end up in the 125%-150% of Medicare range which would cut medical costs by about 25%. We have $9 trillion in Adjusted Gross Income in this country. I hate taxes, but a 1% income tax payable equally by all taxpayers covers it. We have $3 trillion in health care spending in this country, so a 3% tax on health care services covers it. I am sure there are a hundred more ways to do this. But in each case, there is pain because the money must come from somewhere. Just like the quarter under the pillow.

To learn more about Deerwalk's Population Health Analytics solutions, please visit us at www.deerwalk.com, or click below to schedule a demo.