Medicare Reference Pricing - A Prescription to Fix the ACA 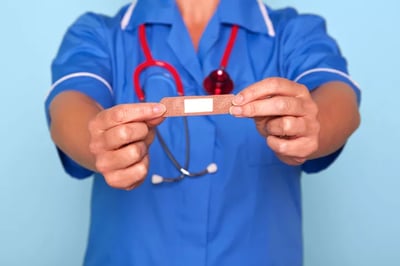 Due to our presence in the Population Health Analytics space, I often get asked about what we should do about the Affordable Care Act ("ACA") and the declining choices at greatly escalating rates. As ACA open enrollment starts this week, I've been thinking a lot about this question, and I think it's timely to consider some solutions today. I look at a lot of data, so a couple of simple observations first. Health insurance isn't that complicated.  Add up total claims on a population and divide it by 80% or 85% and that is the health care premium. Premiums are going up because the claims cost the carriers are paying to providers is going up.

Two main points here. First, 1% of the population spends 30% of the dollars and the next 4% spend another 30% of the total dollars. In other words, 5% of the population account for 60% of the total dollars. If we offer coverage to people with pre-existing conditions (and I think most of us feel that we should), the pre-existing group in almost all cases is the 5%. For every person in that bucket who signs up, we better get 19 people who are not in the 5% or else there is going to be upward pressure on rates with a consistently unhealthy risk pool.

Second, claim costs are a function of utilization and unit costs, pure and simple. If you can't reduce utilization, you must influence unit cost. Influencing utilization involves aggressive management and incentives which is not something done easily on a health care exchange. Self-funded employers actively managing their health plans have success here, but it is hard to imagine utilization success on the exchange as members can drop or switch coverage at any time. So, if you want to know why your health insurance purchased on an exchange is rising so rapidly it is because the claim costs are rising at that pace and the most practical way to stop it is for unit costs to decline.

On the provider side, based on the information available to me, healthcare providers accrue about $85 billion of uncompensated care a year, the majority of that on the hospital side. One of the reasons often cited for high charges to private insurance is the cost shift to cover uncompensated care losses. This does not seem fair to me. I think we should find a way for providers to be reimbursed at some level for their services.

Excluding prescription drug costs, 95% of all medical costs are provided either at a hospital location or in an independent medical office. Doctors in these independent offices usually get paid reasonably close to the Medicare rate (maybe 25% or so higher). Hospitals, however often get 2.5 to 3 times the Medicare rate. This is certainly not the case in all instances, but more often than most people think. That is what the data that I look at shows, and 70% of all medical costs are provided by hospital-based facilities.

As hospitals buy more independently owned practices and ancillary services, this is exacerbating unit cost inflation.  For example, the $500 MRI the insurance company used to pay to the independent imaging center now costs $1500 once it is owned by the hospital. Unlike other industries where consolidation increases economies of scale and drives down costs, the opposite happens in health care. When you combine this fact with the fact that the vast majority of people on the public exchanges have their premiums subsidized, the government is basically paying insurance companies who take the money and then pay health systems well in excess of what Medicare would otherwise pay.  So, we have two big problems. First, we are not getting enough healthy people in the pool, and second, we are paying far too much for high cost services.

So, back to the original question. What do we do? This is my conclusion based on my observations. In my view, the ACA will not be successful unless we do a couple of things. By the way, if you favor repeal and replace, the same issues exist. First, for the $85 billion or so of uncompensated care out there, we need to pay the providers at the Medicare rate. Depending on how the $85 billion was calculated, this is going to cost $35-$40 billion.  We will need a way to come up with it. Our current income tax code raises about $2.4 trillion a year. We need another $40 billion to make providers whole. Maybe we simply add a $300-$400 surcharge to policies. This solves the problem of uncompensated care and that entire cost-shift argument.

Second, make Medicare the default fee schedule in the country. I realize there are codes for which there is no Medicare rate, so we will need to make that adjustment. This does not mean that I am suggesting a single fee schedule.  It simply means that absent a contractual agreement to the contrary, Medicare reimbursement should be the prevailing rate. An insurance carrier and provider would be allowed to negotiate rates as they do today. Providers would be able to bill a patient at any rate they choose, as long as it is disclosed. However, the starting point for all rate discussions would be Medicare baseline, not billed charges.

My estimate is that an informed buyer would spend about $1000 a year less on medical costs than the costs that currently exist in the various provider networks. This is based on average negotiated settlements between parties on out-of-network services. Since there is no free market in healthcare, we need to provide better negotiating leverage to the people paying the bills. Do all that, we eliminate uncompensated care and drop the medical costs by $600-$700 per person per year. Insurance premiums, which are based on claim costs, would come down proportionately.

There may be variations of this two-pronged strategy. Possibly a $50,000 national specific limit that carriers pay into and all claims over the specific are paid at Medicare while claims under the specific continue as they always have. This is not to say that we shouldn't continue with wellness, chronic condition management, bundled payments and the like.  However, if any sort of national health care scheme continues to offer coverage for people with pre-existing conditions and provider consolidation continues, I am not sure how to deal with the premium escalation unless fee schedule reform is included in some form or fashion. As a free market conservative, I wish that was not my opinion, but it is.  What do you think?

To learn more about Deerwalk's Population Health Analytics Solutions, including Medicare Pricing Analytics, please visit us at www.deerwalk.com, or click below to schedule a demo.